Smarter water could be available, free, at the nearest fountain

By The Sting on November 27, 2013 • ( Leave a comment )
UBGreen and the Helen P. Denit Honors Program screen Tapped on campus; a lively discussion of intelligent water choices ensues

If someone stole your smart phone, would you buy it back? What if the thief put a pretty label on it? How about if your phone was disguised so well, you couldn’t recognize it?

I’m not sure if smart phone thievery has reached that level of deviousness.

Bottled water companies, however, have sunk that low, according to Tapped, a documentary film from 2009 screened by UBGreen and the Helen P. Denit Honors Program on Thursday, Nov. 7 and attended by eleven UB students.

While watching the film, I was shocked to hear that Poland Spring and Dasani are taking water from communities without properly compensating them and then reselling the water bottled –  within the same communities as well as elsewhere in the region. That Nestle and Coca Cola own bottled water companies was also a startling and unsettling discovery.

The documentary also explained that, contrary to what most people believe, tap water in the United States is more closely inspected and controlled for quality than bottled water.

Spokespeople for bottled water companies admitted, on film, that the studies they used to determine the safety of their bottled water were run only by the companies themselves, with no outside inspection.

Repeated flashing images of parents and their children drinking bottled water drives home the idea that many people are unaware of this.

Sometimes people can forget other problems that bottled water poses. The opportunity to sit and watch Tapped’s stunning photography of tranquil and pristine-looking mountain lakes, in jarring contrast with images of teeming masses of plastic water bottles clogging once- beautiful bodies of water provides a painful reminder of just how bad the problem is.

These are only a few of the bottled water related problems that Tapped brings to light.

Serious health risks from bottle production as well as leaching from hard plastic bottles containing BPA are discussed as well.

Fish are shown with plastic in their bellies and beaches are littered with multitudes of hard, broken plastic pieces, quickly turning the shore into what the documentary calls “the beach of the future.”

Recycling is apparently not ubiquitous. There is certainly no recycling pick-up at my apartment complex, nor is it a universal cultural norm. Obviously, my community is not alone in this dilemma.

One solution, say citizens interviewed in Tapped, is to stop buying bottled water.

No one at UB’s Tapped screening seemed to be unaffected by the film. In a discussion led by UB Sustainability Coordinator Jeff La Noue, students shared how they were impacted by the documentary. Several students expressed anger at being misled by bottled water advertising and being tricked into paying top dollar for public tap water.

There was a lively chat about ways to combat the problem and the best kind of reusable water bottles to buy or gift. Most students said glass was the best option.

Stainless steel, health department recommended as safest for cooking, may be a user-friendly but lighter weight option.

In any event, no Poland Spring, Dasani or any bottled water was offered at the screening.

UB is filled with water fountains, including several new ones, specifically designed for easy use with reusable water containers – a smart choice perhaps worth tapping into. 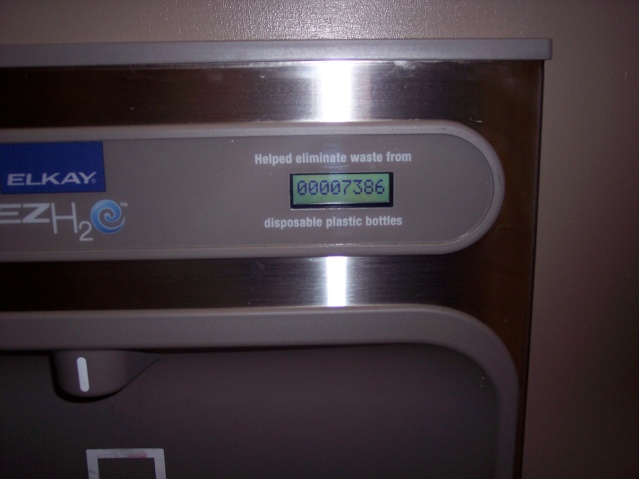 Tapped is available for checkout, free at Langsdale Library.