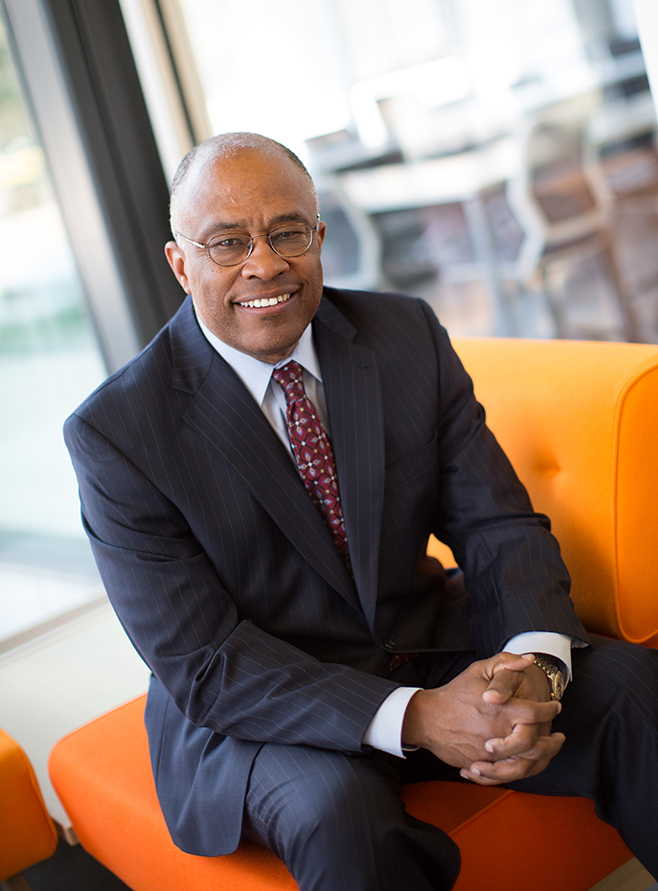 Kurt Schmoke has started his first year as President of the University of Baltimore. However, this isn’t the first time he’s been in the spotlight.

Schmoke became president of the university on July 7, taking over for Robert Bogomolny, who announced his retirement last Spring. Schmoke served three terms as Mayor of Baltimore from 1987 to 1999. Prior to that, he was Baltimore City State’s Attorney for five years. Growing up, Schmoke was recognized for his accomplishments on the gridiron as a star quarterback at Baltimore City College High School. Prior to coming to UB, Schmoke was Dean of the Howard University School of Law in Washington, D.C.

“There were a couple of graduates of the University of Baltimore who first raised the possibility of my coming here with me. I hadn’t really thought about it,” Schmoke said when asked why he chose to apply or the UB President opening after serving as the Dean of the Law School at Howard from 2003 to 2012, and then as general counsel and even interim Provost. “When I found out that President Bogomolny was retiring, and these graduates said something to me about it, I just started reading more about the University of Baltimore, and was very impressed with the progress and the energy of this place over the last few years […] I thought my experiences as an elected official plus the higher education experience could be of great benefit to a public university.”

Schmoke said that’s when he decided to apply, and he feels fortunate to have been selected as the eighth president of UB. Schmoke says while he did learn a lot about Baltimore during his time as Mayor and State’s Attorney, he’s had to relearn the city because of how much it’s changed from when he was Mayor to now.

“That’s been one of the exciting things about coming to this position,” Schmoke said. “The city has made a lot of progress in a number of different areas. The University has made tremendous progress, and I had to learn about those things and how we can fit in the agenda of the city as an anchor institution.”

During a June 25 ceremony at Baltimore City Hall, UB joined seven other universities, including Loyola, Johns Hopkins, Morgan State, Coppin State, and the Maryland Institute College of Art (MICA), along with the Bon Secours Health System, when it signed a Memorandum of Understanding with the city to provide jobs, investments in the community, and solutions to issues facing Baltimore.

The effort is towards a goal set by Mayor Stephanie Rawlings-Blake to get 10,000 more families to move into the city. President Schmoke said UB will likely work together with the other universities on development projects. He says the administration would also like to work with the other institutions to develop synergies in programs such as communications design and digital entertainment, as well as other programs that are strengths for UB, such as business and pre-law.

“We really want to emphasize that we’re a career-oriented university,” Schmoke said, citing UB’s slogan, “Knowledge That Works.” “Everyday, I’m learning about another high quality that’s offered at the University of Baltimore, and I think it’s up to us now to try to let the community know a little bit more about some of these programs.”

President Schmoke says as one of Baltimore’s anchor institutions, UB will be working to not only make a positive economic development impact on the city, but also to make a positive impact on educating “Baltimore’s children.” However, changes are being discussed that could affect who can get what Schmoke called “a high-quality education at an affordable price.”

The University of Baltimore was established in 1925 as an institution for transfer and graduate students. In 2007, the University became a four-year institution when it enrolled its first group of underclassmen. However, the majority of students who enroll at UB are transfers and graduates. According to an article that appeared in the Sept. 5 edition of The Baltimore Sun, about 200 freshmen enroll at UB each fall, but that number has leveled off. In an interview that day with The Sun, Schmoke discussed how flat public funding the University is receiving is creating a need to work more efficiently. Schmoke says he was looking to start a conversation in the UB community, but wasn’t recommending changing the university back to what it used to be.

“I just wanted to understand better why the change was made, and whether the reasons that supported the change … still exist here in 2014,” Schmoke said, adding that the conversation with the University so far has been “very robust.”

“And what seems to be emerging is support for a more targeted, focused freshman admissions policy that align our admissions of freshmen with the strong upper-division programs that we offer, for example in business and accounting and forensic science.” He said he wanted to start a discussion about whether or not the University should focus more on its graduate and transfer students, or continue promoting freshmen admissions.

“What has come back from the community is that we shouldn’t consider this as an ‘either-or’ proposition,” Schmoke said. “Maybe we ought to consider it as making some adjustments to what we’re doing.”

Schmoke says there’s been support for both positions, and the administration is working on building a consensus, and he’s been talking with both faculty and students. At the most recent Student Senate meeting, he says the consensus he got from them was to keep freshmen admissions, but to align them with some of the upper-division professional and career-oriented programs so students can better distinguish what the University has to offer compared to other schools in the region, such as the University of Maryland Schmoke says a final decision about changing the type of institution UB is won’t be made until sometime in early October.