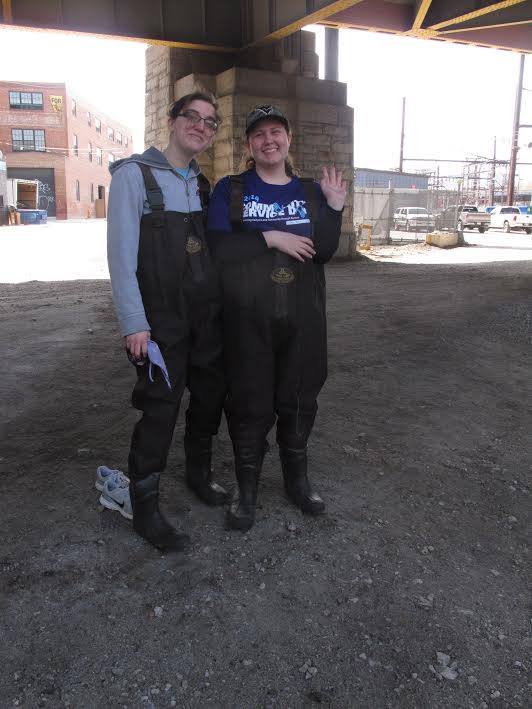 EPA grant will aid UB in cleaning up the Jones Falls

With almost $60,000 of grant money from the Environmental Protection Agency in the bank, along with the enthusiasm of students, faculty and staff, the University is ready to study a section of the Jones Falls in an effort to clean up a vital natural resource within walking distance of campus. A number of UB students bike ride to school along the Jones Falls, as well.

“It’s UB’s home water,” Dr. Stanley J. Kemp, Assistant Professor in UB’s Division of Science, Information Arts and Technologies, said.
Dr. Kemp will be working on the educational component of the Jones Falls project. He was surprised when he first discovered the Jones Falls contained fish and parasites as well as birds nesting along the banks—all signs of a thriving ecosystem.

Despite problems, the Jones Falls is incredibly salvageable, Kemp added. That and its proximity to campus is why he feels it’s UB’s mission to work on cleaning it up.

The biggest health risk is to people, said Kemp. Bacteria levels are high and sewage leaks are rampant, he added, due to the age of Baltimore City’s storm water system. Pipes are a hundred years old and cross-contamination is constant. Dog waste is also a contributor to the problem.

“What is that stench?” is the first thing Pecher hears whenever he discusses the Jones Falls with local residents.

The community is behind the cleanup. People living in the area are trained to track pollution. Local developer, David Tufaro, is interested in working with the ecosystem. A meeting is scheduled to discuss these and related issues on Oct. 10.

Trained UB students majoring in Environmental Sustainability and Human Ecology will be doing microbial source tracking at particular outfalls along the Jones Falls. Targeted sites are in the Mill Corridor between Howard St. and Druid Park Dr.

UB students will be assisted in the project by trained staff from Blue Water Baltimore, a nonprofit organization working towards fishable and swimmable neighborhood streams.

Baltimore Harbor Water Keeper David Flores, also part of Blue Water Baltimore, will be involved, as well, because much of what enters the Jones Falls ends up in the bay. Flores is a law student as well as an environmental steward. He keeps track of pollution that affects the harbor.

Another partner in the project is the University of Maryland Center for Environmental Science, specifically the Institute of Marine and Environmental Technology.

Once data is collected, UB and Blue Water Baltimore will be able to take information to Baltimore City and get specific pipes repaired.

Additionally, a campaign can be started to get people to clean up after their dogs.

A local educational component is planned for the spring. Kemp will show high school students how life is really thriving in the Jones Falls. It’s essential for people to know this, he says, because many people consider the Jones Falls a write-off.

Kemp was shocked when he had students from Hampden who didn’t even know the Jones Falls existed.

Once UB students find out about the Jones Falls, some become com- mitted to cleaning it up.

A number of students participated in picking up trash in and along the Jones Falls during the Spring 2014 se- mester, as part of UB’s Community Service Day.

Donned in waders, Christine Wertz got in the Jones Falls to pull trash out. Wertz, history major and president of the UB Outdoors Club, was team leader for the most recent UB Jones Falls cleanup. Drawn to the project because she wanted to get outside and make a visible change, she said she felt there was a tie-in between that project and her role as president of the Outdoors Club. The student organization’s constitution stresses promoting environmental activism and team leader was one way to do that. Wertz was excited to hear the EPA grant will give UB the opportunity to cleanup more of the Jones Falls.

Curtailing water pollution is es- sential, said UB student, Ayodele Elugbaju, who is working on his master’s in Health Systems Management. Elugbaju volunteered to help pick up trash along the banks of the Jones Falls last spring, as well. Water pollution causes so much damage, Elugbaju said, because water flows it continues to effect people from community to community.

“You’re not allowed to fall in,” Bryonna Jay Edwards said, who collects water samples from the Jones Falls as part of Kemp’s environmental science class at UB. “You’ll get a zero for the day if you fall in.”

It’s even on the syllabus, Edwards adds. An English major, Edwards is primarily interested permaculture as a way to help the environment but she expects to be climbing down a hill every week to collect water samples from the Jones Falls as part of class.

It’s a great way to keep eyes on the stream, Kemp said of taking his UB students out in the field. His class discovered a really bad sewage leak, a couple of years ago, he added, that they subsequently reported to Baltimore City and had cleaned up.

Although much wildlife thrives in and around the Jones Falls, including the yellow crowned night herons that nest in the nearby trees and the American Eel that migrates all the way from Bermuda to live out its final days in Baltimore, the UB community and local residents will be glad to see much needed improvements in the Jones Falls.