The Clash of Win Streaks 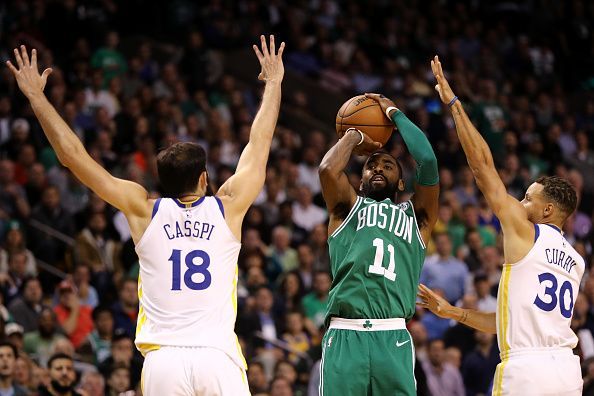 The Celtics edge the Warriors for 14 straight wins

Kyrie Irving through the lane, up and under to the hoop, foul! Irving hit two free throws to put the Celtics up 90-88. Kevin Durant missed a contested jumper off of a Warriors’ inbound to tie the game. The usual end of game clock run outs and fouls commence, and game over. The Celtics win 92-88, extending their win streak to fourteen games, and taking a three game lead for first place in the Eastern Conference.

As the game began, both teams seemed anxious, putting up quick shots, missing wide open threes, and trading turnovers. The Warriors finished the game 33/82, 40.2% on field goals plus 15 turnovers, and the Celtics just 26/79 for 32.9% with 15 turnovers (NBA.com). Despite the many missed shots, the game lived up to its excitement. In the first quarter Steph Curry missed a free throw, grabbed his own rebound, and just past the three point line, he hoisted and swished a jumper.

Jaylen Brown, mourning the loss of a childhood friend, was the player of the game, holding Steph Curry to just 9 points on 3/14 shooting (NBA.com). Brown finished with 22 points, some key defensive stops, and big shots for the Celtics.

The Warriors had the biggest lead of the night, 17 points, and lead most of the game. They settled down in the second quarter, and went on a 12-0 run. The Celtics struggled, sloppy play, rushing shots, and turnovers, signs of a young team. Despite their mistakes, they do not play scared. They stormed back 11 points with active defense, blocked shots, steals, and timely shots. Basketball is indeed a game of runs.

In the third quarter, where the Warriors lead the league in points at 31.8 per game (teamrankings.com), Kevin Durant started to take control of the game. The Warriors pushed the lead back up to 10 points. The Celtics would not go away. Jaylen Brown forced Durant into a backcourt violation, then hit back to back three pointers. The quarter ended with the game tied at 78.

Both teams continued to exchange leads for the remainder of the game. Plenty of missed shots and fouls made it anybodies game to win. The Warriors had their chances. But in the end, it was Kyrie Irving and the Celtics that put the game away. Irving finished the game with 16 points on 4/16 shooting, but it was his free throws that made the difference. He finished 7/8 of the line, sealing the 14th straight win for the Celtics.