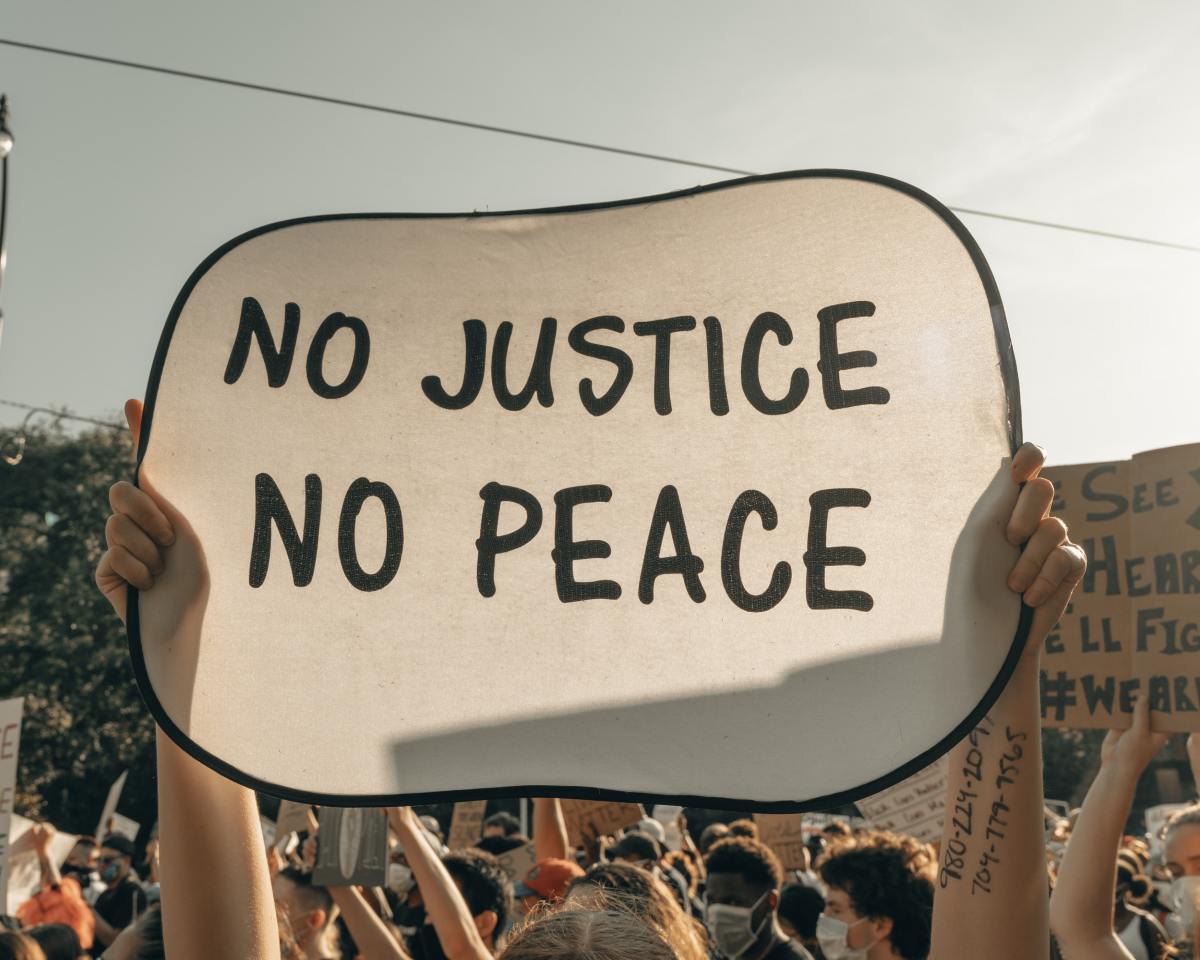 “Because of smartphones, so many Americans have now seen the racial injustice that black Americans have known for generations,” Harris said in a nationally televised address from the White House’s Cross Hall.

“Here’s the truth about racial injustice: it’s not just a Black America problem or a people of color problem,” Harris said before Biden spoke. “It is a problem of every American, it is keeping us from the promise of liberty and justice for all.”

“We can’t let those words die with him,” the president said. “We have to keep hearing those words. We must not turn away. We can’t turn away.””This can be a moment of significant change,” Biden said.

Attorney General Merrick Garland said in a statement that “while the state’s prosecution was successful, I know that nothing can fill the void that the loved ones of George Floyd have felt since his death.”

He said the Justice Department’s civil rights probe into Floyd’s death “is ongoing,”

House Speaker Nancy Pelosi, D-California, said in a press conference from the Capitol that the verdict was a “step in the right direction.”  Pelosi thanked the jury for validating what she and the world saw on tape.

“George Floyd should be alive today,” she said on Twitter. “His family’s calls for justice for his murder were heard around the world. He did not die in vain. We must make sure other families don’t suffer the same racism, violence & pain, and we must enact the George Floyd #JusticeInPolicing Act.”

That legislation passed the House in March and now awaits action in the closely-divided Senate.

“This bill would hold law enforcement account and build trust between law enforce and our communities” Harris said.

“But we can only do so much by legislation alone,” he said. “Our nation must reckon with racial bias and with the reality that, even 158 years after President Lincoln issued the Emancipation Proclamation, America is still not free from the legacy of slavery, segregation, and institutionalized racism. Justice, equality, and opportunity are still being denied to Black Americans, and we must all confront this painful truth.”

Majority Leader Chuck Schumer D-New York, said that the trial served to affirm what many people were already aware of, that Floyd had been murdered in cold blood. But Schumer said that the verdict alone did not end the rampant problem with police conduct in the country.

The divide between law enforcement and the communities they are supposed to protect have not yet been bridged, Schumer said.

“We must remain diligent in our efforts to bring meaningful change to police departments across the country,” Schumer said. “The Senate will continue that work as we strive to ensure George Floyd’s tragic death will not be in vain.”

“While today’s verdict was just, we must think of the Black Americans who have never received justice,” Van Hollen said in a statement. “We must move with urgency to confront and defeat systemic racism in all its forms, and Congress must act immediately to pass the George Floyd Justice in Policing Act.”

Sen. Ben Cardin, D-Maryland, said that the reform measure includes additional provisions that prohibit the “use of racial and religious profiling by police” and changes how law enforcement interacts with marginalized communities.

“As a nation, we simply must do more to ensure that the basic human rights of Americans are protected at all times, even if they are suspected of a crime,” Cardin said. “We also must fundamentally reform our thinking and systems so that individuals are not assumed suspects because of the color of their skin or the clothes they wear. It’s morally wrong and a waste of legitimate police resources.“

“Justice has been done,” Frosh said. “But this cannot be the end. Systemic problems with policing and with equal justice require reform.”

Sen. Cory Booker, D-New Jersey, tweeted that “this verdict is justice served – but it is not justice for George Floyd.”

“True justice would be a country where George Floyd would still be alive today,” the senator said. “True justice demands action – it demands change & that we do everything we can to stop this from happening again & again & again.”

Floyd was killed on May 25, 2020, during an arrest made by four Minneapolis police officers, including Chauvin, who knelt on Floyd’s neck and back for 9 minutes and 29 seconds, resulting in his death.

Chauvin’s trial began March 29. The jury found him guilty on two counts of murder and one count of manslaughter.

Following the verdict, Biden and Harris called the Floyd family. Biden comforted the family, saying the trial would be the start of change.

Advocacy groups, while noting that the verdict was a sign of justice, still continue to fight for other issues. The NAACP website acknowledged that “the jury has spoken, but our lives are still on the line.” A link to a petition for police reform followed the statement.

“We will never begin to achieve true justice for George Floyd until our country completely transforms public safety to save Black lives and reduce racist police violence,” the American Civil Liberties Union said on Twitter.

A fan of fiction books?! 📚
A big Thank You to @marlonwayans & @dcervincomedy for meeting with The Sting, SGA and Seb. A night to remember.
Learn more about Greek🇬🇷🏛 and Turkish 🇹🇷music with Valerie Hinkle, our new writer.
Is Gap Year a good solution or a distraction?
Good Morning UB Family!!🐝
Did you know about UB hidden gym? Torianne has explained where this gym is located and why is called hidden.