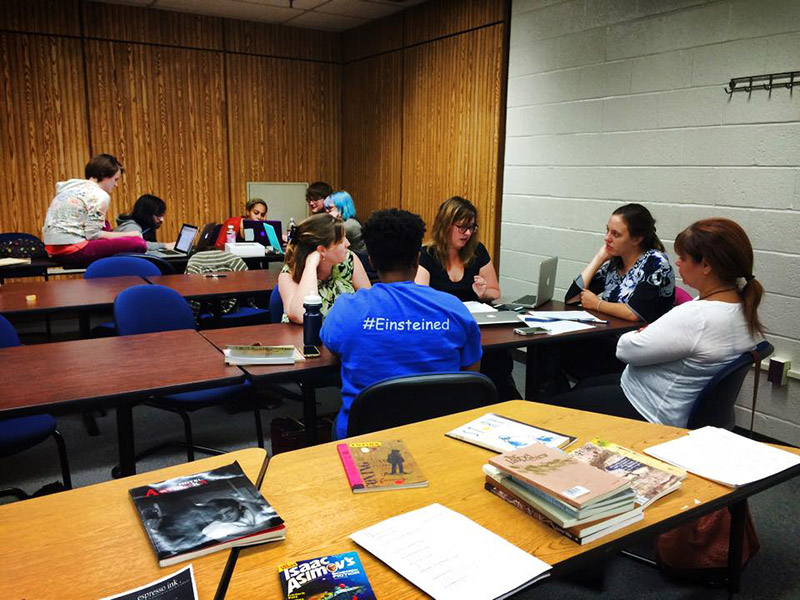 On Dec. 18, UB’s student-run literary journal, Welter, will throw a release party in the Bogolmolny Room. Every release party is different, year to year, just as the content and the journal’s appearance vary. This is because it’s created not by a returning team of editors, but rather by students who have signed up for the corresponding class.

“Welter is a teaching tool,” Meredith Purvis, the class’s professor for this term, explained. “A key reason it exists is to give students the opportunity to practice being editors and publishers.”

This fall’s shift is going to feel even bigger because, for the first time in a decade, Welter is back in graduate student hands. Students from the MFA program in Creative Writing and Publishing Arts are now in charge of the journal’s publication.

Welter begins the way many classes do, with questions. The most basic— what exactly is a literary journal?— begins a collaborative process involving multiple genres of writing.

Welter has something of a wild and uncertain past. Its origin is obscure; it isn’t even known for sure when the journal began. The earliest known issue is 1964, which would make 2014 the journal’s fiftieth year. On the 3rd floor of the LAP building is a slew of past issues of Welter in many forms— from rolls of newspaper, to posters, to more traditional books.

As has been the case for the recent issues, Fall 2014 Welter will be a book. Rather than the unusual landscape- style 5.5” x 8” however, Welter is shrinking. Still, it is retaining some of its history.

“The spirit of Welter’s past is still there,” Editor-in-Chief Christopher Warman said. “The book is pocket- sized, so it’s still funky and different.”

The class’ prerogative to change the book’s size is part of the move to the graduate level. Now, students complete the entire process, including design. Just like the journal’s smaller size, the pool of accepted submissions also shrunk; the spring issue had 50 pieces, while fall has only 28.

“We’ve been especially focused on selecting works that fit well together,” Warman said. “We looked for pieces that play off of each other, that are contributions to a larger, but singular humandialogue.”

The creative process, as with any journal, was not without its conflicts. Another thing that sets Welter apart from a traditional journal is that debate—which happens in almost every session—is often encouraged. Naturally, this means conflict, but it also means inclusion. Rather than leaving the elected teams to be insular, decisions like the choice of cover’s color were made by the whole class.

“Nobody,” Warman said, “is just a passenger on the Welter train.”

This participatory quality means Welter is ever changing. The beauty is that when you visit the release party in 2015, the journal will be entirely different from the event this December.

“In some ways the core of Welter’s identity is about being something of a blank canvas,” Purvis said.

Come see this year’s work of art at the Dec. 18 release party.

Soon, Welter will release a brand new, student made website. In the meantime, visit them at www.ubalt. edu/welter.