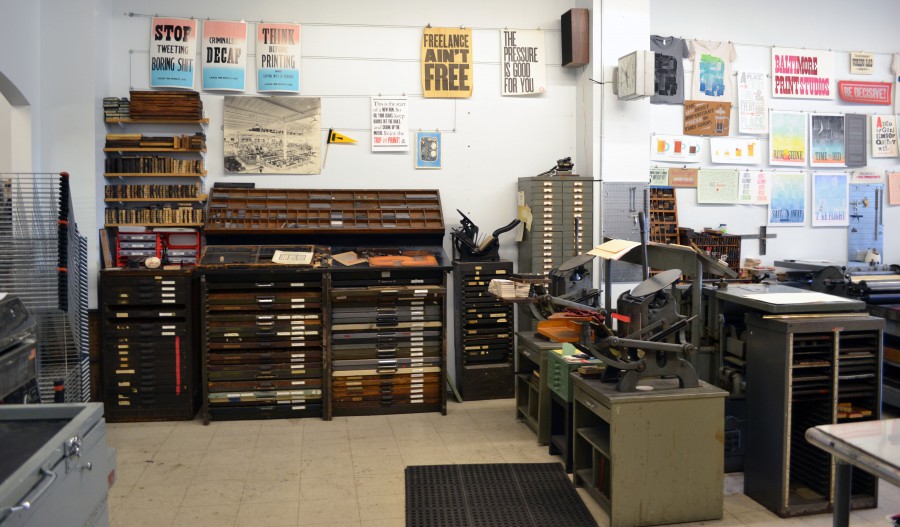 This year,  (BPS) is celebrating five years of business. A public-access printing studio, BPS is located at 18 W. North Ave in Station North. The husband and wife co-founders, Kyle Von Horn and Kim Bentley, run all parts of the business, including hosting workshops and studio hours, and working on private design commissions.

BPS works with two types of printing: screen printing and letterpress. Screen printing is a process that uses silk screens to create all sorts of striking images. Letterpress uses older machines and handset type to create beautiful typographic items – from chapbooks to stationary to posters. Both require expertise, but more importantly: they require equipment. Letterpress equipment is especially difficult to come by, since the machines are all older, and many are rare or expensive. The two Vandercook SP 20s, for example, are huge machines, and not items most people would be able to fit in their house.

The price and cumbersomeness of the equipment is a large part of why Von Horn and Bentley founded BPS. The model – which was meant to provide a space where people could learn and practice printing without purchasing expensive equipment – drew inspiration from other cities, which offered spaces for printing artists to produce their craft.

Having worked the printmaking program at MICA for a number of years, Von Horn had seen first hand how often graduates of the printing program were in dire need of space.

“They didn’t have access to the equipment, and some of this stuff is hard to find, or hard to maintain, or expensive,” he said. “We thought we could create a space that would be a resource for the design community.”

The pair looked for potential spaces throughout the city. When Baltimore Print Studios opened its doors back in 2010, Station North had already begun to live up to its designation as an Arts and Entertainment District. Things were changing quickly in the neighborhood, and Von Horn and Bentley felt that North Avenue was an ideal location for an art related space.

Since BPS opened its doors five years ago, many other businesses have followed suit. Red Emma’s moved into an expansive space on the corner of Maryland Avenue, and just this past year, Hopkins and MICA opened the new film space in the Center Theater. Meanwhile, the Parkway theater is being renovated to become a multi-use arts, film and office space. These are only a few examples of the change happening throughout the neighborhood.

Throughout all this change, BPS continues to run a threefold purpose of studio hours, commissions and workshop. The studio hours are available to those who are either experienced in printing, or have attended the appropriate introductory workshops. The rental fees are generally $15 per hour. Van Horn and Bentley also work with private individuals who might commission a variety of printed items – such as wedding invitations or business cards – and sell their own work as well.

Workshops are going to be of the most interest to readers who haven’t worked on this type of printing before. Offered on a monthly basis, workshops are limited to small groups of six to nine, ensuring that every student receives the help he or she needs. The introduction courses – in screen printing and letterpress – are offered on a monthly basis, with other seasonal or featured workshops occurring as well. This month, for example, is the ever-popular holiday card workshop, where participants make their own set of cards. 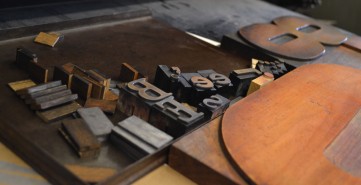 At the end, everyone leaves with a set of their own cards. Though the holiday workshop is full, there are still openings in the Valentines workshop that will happen in February.

“These include skills like bookmaking or textile printing,” explained Bentley. “Basically, these are things we’re not expert at, but we do have the facilities and the knowledge to help co-teach the workshops.”

Generally, the workshops cost 150 dollars, and run most of the day, from 10 am to 4 pm. Lately, they have also been working with a number of visiting artists and designers as well. Both the regular and the one-time workshops fill up very quickly – when I checked the website, every listed workshop was full – but interested parties can sign up for BPS’s mailing list to receive notification of sign-ups.

In addition to running BPS, both Von Horn and Bentley work other jobs. When I ask them about their work life balance, they look at each other and smile weakly. At this point, they are at the end of their BPS work week. Tomorrow, they will go into work for their other jobs. This is their week every week.

“A lot of the shop stuff happens at the end of the week,” said Bentley. “And the beginning of the week is for other work. And then evenings, that’s the time we have to talk about the shop.”

Though it seems like this leaves little time for leisure, it is clear from how they talk about their work, and their willingness to devote so much of their time to the space, that BPS is a labor of love, built as much on passion as it is on dedication and business skills.

All through the interview, their little dog sat under their desk, watching passersby walk down North Avenue and occasionally letting out a warning bark or two. I could see why she was so interested, and why she probably loves coming to work with them. There was, as usual, a lot of foot traffic on North Avenue: a mixture of MICA students, people making bus connections and locals just enjoying their neighborhood, a neighborhood that Baltimore Print Studios has helped to shape.

All photos courtesy of Jessica Kim