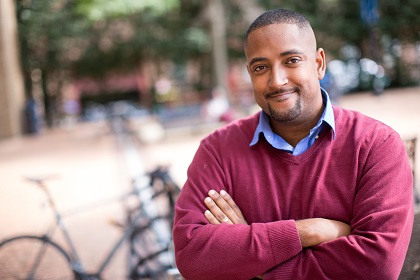 Steven Leyva was born in New Orleans, Louisiana and raised in Houston, Texas. His poems have appeared or are forthcoming in 2 Bridges Review, Scalawag, Nashville Review, jubilat, Vinyl, Prairie Schooner, and Best American Poetry 2020. He is a Cave Canem fellow and author of the chapbook, Low Parish, and author of The Understudy’s Handbook, which won the Jean Feldman Poetry Prize from Washington Writers Publishing House. Leyva holds an MFA from the University of Baltimore, where he is an assistant professor in the Klein Family School of Communications Design.

Where did Professor Leyva study?

Professor Leyva attended undergrad at Oral Roberts University in Tulsa, Oklahoma. He then went on to complete his graduate work here at the University of Baltimore in the Creative Writing and Publishing Arts program.

Growing up with an older brother, Rabu, who was a high school theater then mathematics teacher had an impact on Professor Leyva’s ultimate career field choice, considering he had already “seen a model of that in [his] life.” During his first year of graduate school, he also started the Baltimore City teaching residency, where he became a high school teacher in the city. Professor Leyva recalls, “my first year in grad school was also my first year of teaching high school… it was stressful [laughs], but I enjoyed the framework of it all.” He also notes that teaching is not necessarily a job for just anyone, but that he considers himself “a curious person” and that “teaching is a profession where you are affirmed and rewarded for being curious.”

Does Professor Leyva feel any anxiety surrounding to concept of being a black writer?

Professor Leyva explains that he did feel pressure in some ways, but it was not always necessarily the typical question of, ‘how are you going to make money?’ By the time he had discovered writing poetry and chosen to attend grad school for it, he wasn’t too worried about how to apply his degree, since he was already teaching high school and had planned to continue with it after graduation. What he felt more pressure about, Leyva reveals, was “not being a certain kind of black voice the industry wanted.” He elaborates the fact that as his writing career progressed over time, he realized his writing wasn’t really meeting people’s expectations of where it could be marketed.

Leyva shares, “I grew up really, really poor but I also grew up doing really well in school… I wasn’t involved with drugs… led a pretty straight-laced life, had people to help me, but don’t get me wrong… we were living in the hood.” Yet he stresses that he didn’t have that “up from the bottom, I could have died” experience that many folks expected to be reading about within his writing, which typically ended up being more so about his love of comic books or his childhood in New Orleans. For Leyva, this led him to question, “where are the nerdy black men, are they getting book deals?”

Why did Professor Leyva choose Ubalt?

Leyva shares that throughout the duration of his graduate program, he only had one black professor the entire time. After already beginning teaching as an adjunct professor straight out of grad school, he felt that UBalt was a familiar place, somewhere he wouldn’t have to uproot his family’s life to pursue a job with. He expresses that “it felt like I could give back to a place that really gave a lot to me,” while admiring the university’s range in population demographics and close-knit classroom feel. Another appealing aspect of teaching at UBalt for Professor Leyva stems from the notion that “we can have really intelligent and vibrant conversations, but it’s not pretentious.”

What does being a black professor at an institution like Ubalt mean to Professor Leyva?

Leyva shares that “having someone who doesn’t necessarily have your exact same experience, but maybe is in the same solar system as your experience, sometimes can be really helpful.” Additionally, he tries to be “the best example of one kind of blackness I can be, so that what it might do is expand what black life means at this school, or reinforce [what] it [means].”

What inspired Professor Leyva to pursue teaching courses that fall outside the stereotypical norm?

Leyva states that he always tries to be himself, and to combine hobbies with work is something he’s always been interested in accomplishing. He explains that, “in order to create and think critically, you have to be able to adapt. You see it within podcasts, twitter…” so he poses the question, “why can’t we combine the two [hobbies and work] and make it more enjoyable for everyone?” Leyva elaborates that he is attempting to show his students “what is possible,” that there may be different lanes where each individual’s interests lay and there “is a way for you to flow through it” based on the skills students can potentially adopt and enhance upon within the class.

What and/or who has been Professor Leyva’s biggest inspiration as a writer?

Professor Leyva attributes his inspiration to several different people who had significant impacts on his life, especially regarding opportunities he’s been given. He credits one of his former grad school professors, Kendra Kolpelke, who founded the Creative Writing and Publishing Arts MFA program at UBalt, as being instrumental in getting the interview which eventually led to his full-time teaching position here. Leyva also highlights his brother, Rabu, as being an impactful role model and the first person to ever really encourage the arts in his life. He shares that, after grad school, a poet named Tim Teebles “had a generous way of reading my poems” and helped give feedback on Leyva’s first book.

Mainly, though, he has been heavily inspired by the world of literature and by reading other poet’s works. He expresses that there have been countless individuals who have given him opportunities and believed in what he could do as an artist, people who he felt were able to see “something valuable” and “worth developing” in the art he was producing that led him to where he is as a writer today.

What is Professor Leyva’s reaction to the recent, continuous threats of violence against HBCU (Historically Black College/University) institutions?

Professor Leyva strongly details his feelings on the continued occurrences of racism at these institutions. He states that threats such as these are “just another form of terrorism… [which] I think is the exact opposite of what an HBCU is supposed to mean… [they’re] supposed to be [these] place[s] where black folks can learn, not have to explain their cultures, be with other black people… in other words, [they] should be place[s] of safety.” Leyva’s consensus is that these matters undoubtedly need to be taken more seriously and that those making threats need to “have the book thrown at them,” because at the end of the day, “[I’m] not tryna die going to school.” Threats of violence such as these are just yet another strain on black folks in today’s America.

What’s next for Professor Leyva?

Professor Leyva explains that he is working on a new book of poems as well as an article about poetry and public memory with another UBalt faculty member. He shares that next year, he will be applying for tenure here at UBalt, which will lead to increased job security, a bigger salary, and improved overall happiness for him and his family!

On behalf of The Sting, we would like to give a huge ‘thank you’ to Professor Steven Leyva for taking the time out of his busy schedule and letting us conduct this SPOTLIGHT interview. Also, Sting readers: bee on the lookout for new articles!